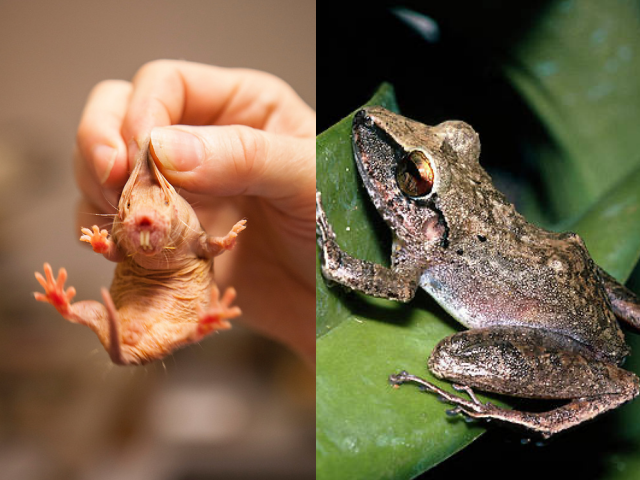 On this page, you will find a list of amazing animals that start with q and exciting facts about each animal. This list includes individual species (quokka) and well-known groups of species (quolls) whose names begin with Q.

Animals that start with Q

The quagga is an extinct subspecies of plain zebra. The quagga only had stripes on the front half of its body. Its rear was brown, and its legs and undersides were pale. It was found in South Africa.

Quail are small and mid-sized game birds. Quail spend most of their lives on the ground and tend only to fly for short distances. Quail eggs are considered a delicacy in many countries.

The Quechuan Hocicudo is one of the animals that start with the letter q. It is a rat-like rodent that lives in the Andean cloud forests of Bolivia. It only feeds on insects and probably uses its long claws for excavating invertebrates from the earth.

Queen Alexandra’s birdwing butterfly is the world’s largest butterfly. The female’s wingspan can reach 25 cm (9.84 in.), and individuals can weigh up to 12 grams (0.42 oz.)

The Queen of Sheba’s Gazelle, one of the animal’s names that start with q, is an extinct antelope species. It was found on hillsides and mountains of Yemen. It was a common species in the mid-twentieth century.

The queen snake is a nonvenomous snake found in North America. The queen snake’s back is dark green. Its belly and sides are creams with dark stripes. The snake is around 15 to 42 in (38 to 61 cm) in length.

The Queensland grouper, one of the Spanish animals that start with q, is a fish found in the tropical waters of the Indian and Pacific Oceans. It is the largest bony fish found on coral reefs.

Animals that start with the letter Q

The Queensland tube-nosed fruit bat is also known as the eastern tube-nosed bat. The species is brown and has pale spots on its wings. It has protruding, tube-shaped nostrils from which the species gets its name.

The red-billed quelea is a small bird found in many countries in sub-Saharan Africa. It has pale brown wings, a cream chest, and a sturdy red bill.

Quetzals are colorful birds found mainly in tropical regions of Central and South America. The best-known quetzal, one of the animals that start with q, is the resplendent quetzal, the males with extremely long green tails.

The quokka is a cat-sized member of the kangaroo family, Macropodidae. It is found in the southwest of West Australia, both on the mainland and several nearby islands.

Quolls are small to medium-sized marsupials that are found in Australia and New Guinea. They are carnivorous (meat-eating) and feed on small animals such as insects, birds, and reptiles.

The Lark Buttonquail or Quail-plover is a species of bird in the Turnicidae family. One of the animals that start with the letter q is in Benin, Burkina Faso, Cameroon, Chad, Ivory Coast, Ethiopia, Ghana, Kenya, Mali, Niger, Nigeria, Senegal, Sudan, Tanzania, Togo, and Uganda.

The Quebracho Crested Tinamou, Eudromia formosa, is a species of tinamou found in dry forest habitats.

50 Popular animals that start with M

Animal Names that start with Q

The smallest riflebird, one of the animals names that start with q, measures 23–25 cm. The Male has an iridescent purple sheen plumage, which becomes more blue-green on the head and more bronze on the lower breast. The throat is velvety black with a metallic green and blue triangular patch in the center.

There are estimated to be between 200 and 300 left living in the wild. They have an identical diet, habitat, and behavior to the giant panda.

These edible marine bivalve mollusks are widespread throughout North America and are also amazing Spanish animals that start with q. They can be found in estuaries buried under the sand. These clams have hard-shell and have sizes varied from 1 to 4 inches wide.

A group of these rats is called a colony, horde, pack, plague, or swarm.

They are named after the blue-ringed black spot on their heads that resembles a crown. They are capable of digesting the tough flesh of sponges.

The average size of a queen snapper, one of the famous cartoon animals that start with q, is 21 inches. This fish is bright red on its upper and lower sides with large and yellow eyes. Their typical habitat is offshore over rocky reefs of the continental shelf.

A tropical Atlantic fish is large, oval-shaped, have small eyes, and is laterally compressed.

These creatures are found in Australia. They get their name from their raised tubular nostrils.

The Queen angelfish is commonly found in tropical and sub-tropical coastal marine waters. Their yellow faces, blue bodies, and yellow edging on their scales are completed with yellow tails. One of the animals that start with q, its maximum size is 45 cm long while its weight is up to 1.6 kg.

The quillback rockfish live in saltwater, especially in the bays and waterways of the Pacific coast. This rockfish can be found on rocks or hiding in rock gaps about 150 feet under the sea. These fish can grow up to 0.9-3 kg in weight and 61 cm in length.

It is a large mole rat and the only member of a colony of naked mole rats to bear offspring, sired by only a few miles. The queenmole rat, one of the animals that start with the letter q, had 100 offspring.

The killifish is an elongated, eel-like fish that reaches 34 cm in length. It is native to the north Pacific Ocean, from the Bering Sea south to Oregon.

The queen parrotfish is a species of marine ray-finned fish, a parrotfish, in the family Scaridae. It is found on reefs in the tropical West Atlantic Ocean and the Caribbean Sea.

Originating in India, Myanmar, Thailand, north-western Malaya, and the Mekong River basin, this fish, one of the animals names that start with q, is sometimes found in community tanks by fish-keeping hobbyists. It grows to a maximum length of 3.1 inches.

Quaesitosaurus means extraordinary lizard is a genus of nemegtosaurid sauropod. It lived from 85 to 70 million years ago during the Late Cretaceous (Santonian to Maastrichtian ages).

It is a species of typical crustaceans in the family Mysidae. They are omnivores and can grow up to 3 mm.

The Quarter Horse, one of the Spanish animals that start with q, is an American breed of horse that excels at sprinting short distances. Its name is derived from its ability to outrun other horse breeds in races of a quarter-mile or less.

Qianlabeo striatus is a species of cyprinid fish endemic to the Pearl River drainage, Guizhou, China. It is the only member of its genus.

This fish is found in Thailand, the East Indies, Borneo, and the Philippines north to China and Nagasaki, Japan, south to New Guinea, and the northern half of Australia. It has a long, beak-like lower jaw, shorter than head length.

The Quitobaquito pupfish, one of the famous cartoon animals that start with q, is found only at Quitobaquito Pond and in established refuges on Organ Pipe Cactus National Monument. The desert pupfish were extirpated from Arizona, and natural populations remain at the Salton Sea in California and Mexico.

It is found in the reef-associated, marine, depth range 12 – 35 m environment.

The Queensland yellowtail angelfish, one of the animals that start with q, lives in the reef-associated, non-migratory, marine, depth range 10 – 50 m environment.

It is found along Australia’s eastern coast. The fish is sandy to whitish, with small brown spots over most of the back and upper sides and brown bars and blotches beneath. It has a maximum length of 14 cm.

Quacking frogs, one of the animals that start with the letter q, can hibernate under rocks and logs during summer and autumn. Calling males will respond to human quacks by quacking back. Adult Quacking Frogs can vary in size.

It reaches up to 35.2 centimeters (13.9 in) in shell length. The queen conch is herbivorous. It feeds by browsing for plant and algal material growing in the seagrass beds and scavenging for decaying plant matter.

The quagga cat shark, one of the Spanish animals that start with q, is found on the continental shelves, on or near the bottom.

The body of the queen fish is elongate and moderately compressed; the largest recorded specimen was 12 inches.

The spinner shark, Carcharhinus brevipennate, is a species of requiem shark, family Carcharhinidae, named for the spinning leaps it makes as a part of its feeding strategy.

The Queensland school mackerel, one of the famous cartoon animals that start with q, is a species of fish in the family Scombridae.

The quillback carpsucker is closely related to the high fin carpsucker and the river carpsucker.

The sandbar shark is also called the thick skin shark or brown shark.

﻿These are the animals names that start with q and are found in the desert to seas to grasslands to trees across the globe.