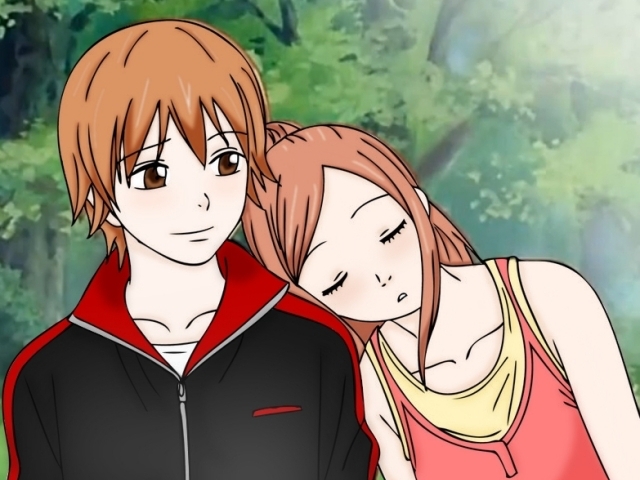 Thinking of our favorite shows and anime, we often develop a liking towards pairings of characters, shipping them, or wishing they would become a couple. Many shows focus on a variety of genres, but it is nice to have a dash of romance to spice things up. Seeing two characters fall in love makes fans laugh, and sometimes cry either tear of joy or sadness. So without further ado, here are the best cute anime couples in love.

The Naruto and Naruto Shippuuden series gave us plenty of action and a nice amount of lovey-dovey moments between Naruto and Hinata.  This couple fit the bill of childhood sweethearts, owing to them having grown together. They even trained as one and fought for the same causes. Sadly, as anyone who’s familiar with this series will agree, Naruto was often clueless about Hinata’s crush on him. Good to know that Hinata did not give up easily. Her bravery and Naruto’s adorable naivetés made for some of the most memorable romantic moments in the anime realm.

These two lovebirds created some of the most intense emotional moments you will find among the best anime couples. They have a distinctly human relatability by way of baggage and complicated pasts, both of which have endeared them to viewers. Some people would say that naïve adolescence holds one of the most intense romantic memories for them. That’s precisely what Kaori and Kousei bring to the anime world, and fans have enjoyed watching them do so.

A hot-headed troublemaker, Kyou, and an emotional teen suffused with hope and dreams of sweet love, Tohru, both create some fine chemistry and are rated as one of the best anime couples. She does not just have Kyou to think about, in fact, Tohru’s exploration of love generates some nice interactions with her fellow roommates.

In a world of sports anime with implied homosexual relationships, Viktor and Yuuri stand out as being a realistic pairing in the show Yuri on Ice. Viktor gives Yuuri confidence in a healthy way, trying to get him to realize his true potential. Yuuri falls in love with Viktor and realizes that they both need each other, forming a mutually healthy relationship that shines throughout the series.

Risa and Otani are two students who get along and share a lot of similar interests; however, Risa is the tallest girl in the class while Otani is the shortest boy. Together, they make a hilarious pairing and are often considered the comedic relief of the class as well as one of the cute anime couples.

Meet Tomoya, a delinquent boy who has a negative outlook on life. When he meets Nagisa, she teaches him how to find love in life, despite the past. She is a nice and caring girl who suffers from a mysterious illness. She brings much positivism in Tomoya’s life as he helps her become more confident. Eventually, the two get married and even have a child.

When Kousei a piano prodigy sees the world in monochrome and he’s in the need of some color in his life. After being abused and forced to play the piano, Kousei forgets what it is like to enjoy life and blocks out music from his life. However, when Kaori, a fellow musician, appears one day, everything changes. She is the ray of sunshine in his life who teaches him how to love music once again, as well as how to love others. They are regarded as cute anime couples.

But it is a fact that the scene of the first kiss between Kirito and Asuna, was worthy of an Oscar. In fact, it was a natural cliché, which was used in a natural way. The difference was in the charisma of the characters and the combination of the two that combined.

The kiss took more than a decade to happen, but when it happened, there was a film specially to tell the story with a good development of the novel. And thanks and this film, today we have our Boruto. Luckily the happy ending of the anime couples kissing Naruto and Hinata, which was sealed since the beginning of the anime, was beautiful. As well as a good canonical story, with animation and beautiful designers, they made a beautiful kiss scene.

They had the cutest teen romance ever, kicked ass together, and remained loyal to each other until the very end. They are a very inspiring gay couple indeed.

Ymir and Christa are one of the best gay anime couples and have such an interesting dynamic and each has such a complex personality. Ymir is incredibly protective of Christa, so much so that she is willing to betray all of humanity to keep her safe. The cute affectionate moments the two have together are few and far between, as is any solid idea of their history, but what makes this cartoon couple in Love so cool is how distinct and complex their personalities are.

When news came around that their relationship was indeed romantic (both Korra and Asami are bisexual women), the internet lost it. Korra and Asami had an exhilarating relationship, from making fun of their mutual ex-boyfriend to being vulnerable with each other and going on fantastic adventures together.

Sumika is a high school girl who is in love with her best friend Ushio but can’t bring herself to confess her feelings because Ushio is apparently really picky about the girls she dates. Sumika is tall, strong, and outgoing, but Ushio only seems to be into shy, cute girls. Throughout the two girls’ storyline and rated as one of the cute gay anime couples, we see interesting side stories as well that focus on lesbophobia and being a young gay student in Japan.

How to Draw Anime Characters Step by Step (30 Examples)

Anaru is a childhood friend of Jinta and Menma Anaru, Anjou is distressed by how hard Jinta is working, or punishing himself, for Menma’s sake, in this scene, she hugged jinta and said to him: When you ran away like that, wasn’t that the same thing as saying you love Menma?

Go watch it and behold Rikka attack-hugs (all her hugs are attack-hugs). By watching this scene where these cute anime couples cuddling, you can feel it now. That the show is well animated and highly constructed.

It happened while Tomoya sees Nagisa but is hesitant to call out to her recalling all of the terrible things that their meeting has caused her. In the end, Tomoya calls after Nagisa. She is relieved that he decided to do so and makes him promise to not regret having met her.

StrawberryPanicis basically a lesbian anime soap opera where it portrays the relationship of lesbian anime couples Shizuma Hanazono and Aoi Nagisa. Aoi is an inexperienced transfer student who finds herself embroiled in her new Catholic school’s complicated social hierarchy. Shizuma sits at the top of the hierarchy but finds herself drawn to Aoi. Their relationship sometimes seems like that of a mentor and a mentee, but it eventually blossoms into a full-fledged romantic relationship.

Chikane and Himemiya love each other passionately and would do anything to protect one another – and their love will be tested dramatically when the incredible celestial powers that dwell within them are awakened, and they wind up on opposite sides of a terrifying battle of good versus evil.

Whispered Wordsis an underrated romance anime that features one of the charming lesbian anime couples. Sumika Murasame is wildly in love with her classmate, Ushio Kazama. While she’s delighted to learn that her crush also likes girls, that aren’t enough – Ushio is oblivious to Sumika’s feelings for her, and continuously falls in love with other girls who reject her. Sumika consoles her every time but hopes that one day Ushio will turn her attention to Sumika and fall in love with her.

Spike is the epitome of cool. He’s the bad boy you’ve always wanted, except this time he’s a cowboy who lives in space, which really puts a spin on the age-old trope. A true gunslinger, his cool charm and devil-may-care attitude are magnetic. Julia, while appearing less often in the anime, is a leggy, wistful-looking blonde. One of the hot anime couples, these two playoff like Bonnie and Clyde, with their devilish good looks and penchant for doom.

Men are always supposed to look better when in tuxedos and women can rock them too but Tuxedo Mask takes it to a whole new level. Tall and charming, his sharp features and tousled hair is a winning combination. Sailor Moon is a literal moon princess and so, naturally, she is the image of sheer perfection. With a slim body and beautiful blonde hair, her best feature is undeniably her welcoming smile.

Chane is dark and dreamy. Her ferocity is intense and an undeniably attractive feature of her character. Particularly striking is her golden eyes, which give her a feral appearance that is truly unique. Claire, with his roguish red hair and tell-tale smirk, possesses both charm and confidence. One of the hot anime couples, they pair together beautifully, black and red, as the ultimate romantic duo.

Shizuku is probably one of the most adorable, yet sexy, tsundere characters ever, and she surprisingly doesn’t even come with a loli body like most tsundere characters do. Eris is very open with her feelings, maybe even a little too open. But it’s exactly this combination that leads to so many enjoyable and funny moments among these Yuri anime couples.

This is probably the Yuri couple with the biggest amount of fan fiction available. One is a badass tsundere and the other is a sexy stalker.

Speaking of famous Yuri anime couples, Chikane and Himeko are probably some of the most famous, which is absolutely no surprise. Just look how gorgeous they are and how well they fit each other.

In the future, we are bound to run into more anime couples worth a mention. You may have your own favorite pair. If you do have a favorite anime couple you think deserves a mention, please let us know.