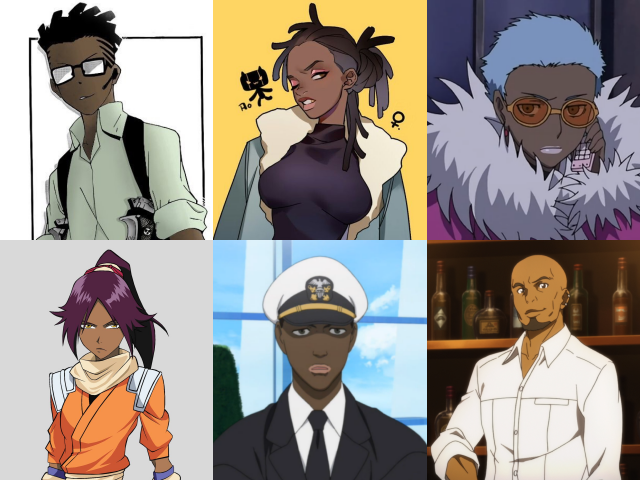 Anime characters are known for their contrasting skin tone variations ranging from fair, light-toned, or black. Every name from the anime world is an absolute example of perfection when it comes to designing and display. Some of them are samurais, war veterans, zombies, or even old school bubbly characters. Depending on personality, power, and appearance, popular black anime characters are listed below.

He lies at the top list of black anime characters male. Afro suffered a traumatic past after witnessing his father’s murder, but the series takes a futuristic touch when he discovers some magical powers. The number 1 headband is his prime motive, and slowly he develops into a cold-blooded killer.

Kaname’s appearance in the anime bleach is fantastic with buddies Gin Ichimaru and Sosuke Aizen as he betrays the soul society. As he discovers the cruel intention of Aizen, he chose to follow the least bloodshed path, and the journey of his struggles is strongly depicted in the series.

Kilik is amongst the top meisters and is a majestic soul eater anime. The happy go lucky attitude and stress-free nature helps in maintaining his cam instead of thinking about the life hassles. His attribute transforms him to a group leader who gets intense in the later story. You would love to follow the journey of this popular black anime character who goes against all the odds to help his friends.

Fourth Raikage A from ‘Naruto’

Popularly known as ‘A’ in the anime show, this character is a gentle giant who also refers to himself as washi. A militant demeanour who keeps faith in B but can go to an extreme extent if the latter misbehaves. He also holds the courage to kill B if he fails to pick the correct path.

James tragically lost his mother in early childhood and chose the military. After getting wounded to death, Amshel tried to save him, ensuring that he turns into Chevalier. As a result of which he earned access to military weaponry. This punctual, serious, ambitious, and devoted black male Anime is worth a watch.

Other popular black anime characters male is as follows:

If the list of black male animes seems exciting and thrill-filled to you, these black female anime characters would add to your excitement. Let’s start with these women black characters in Anime.

This black character in Anime is an insane hacker but wins everyone’s heart with the hunter squad that she hacks along with the jets ship. Although you might find her a bit awkward, she is a true genius. Ed is an anxious crew member who saves the crew from potential disasters.

Despite her quiet role in the anime series, her tall, dark personality is quite appealing and captivating. You can spot her in the 17th episode of the series. Her charisma is hard to handle, and you can get carried away by her persona.

Atsuko Jackson from ‘Michiko to Hatchin’

It is a catchy anime of an Afro-Latina cop who follows a covert mission to get hold of a prisoner who flew away named Michiko. The wild part is they grew together in an orphanage but are now leading two different shores of life. This Brazilian style anime is a good watch for anime lovers.

She’s a former leader of Onmitsukido and known peculiarly for her black cat look. You can adore in her this kitty look which retains for quite a long time.

Canary is a servant in Zoldyck mansion and appears initially as a house guardian. She beats Gon when she finds that he tries to cross the line and acts as a very disciplined person.

Other black female anime characters are as follows:

Helles from ‘Goddess of Destruction’

These are the few exemplary dark-toned and strongly framed popular black anime characters who can blow away your mind with the grand appearance on-screen. For all anime fans, these black characters in anime act as a great source of entertainment and inspiration with immediate relevance to real-life emotions. Such characters take you to a new world of marvel that is fascinating and exceptional!