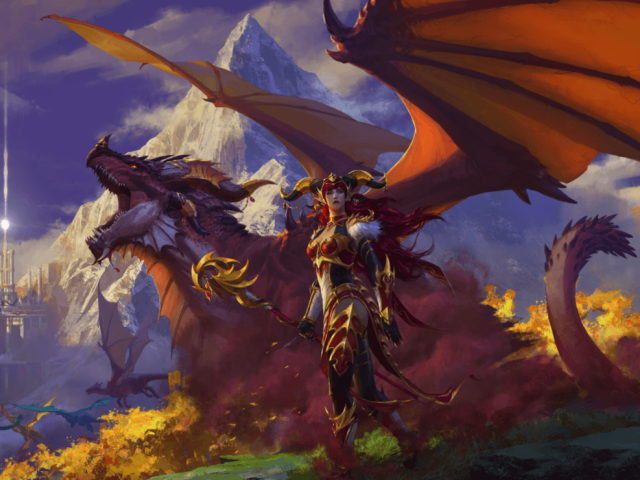 Dragons are so hot right now! Fans of World of Warcraft are excited for the upcoming ninth expansion of the successful, massively multiplayer online role-playing video game from Activision’s Blizzard Entertainment. Much to gamers’ delight, World of Warcraft: Dragonflight is set in the fantastical world of Dragon Isles. That means there’s a whole new continent to explore — but beware, danger lurks on land and in the air.

Thus far, Activision Blizzard is keeping quiet about an official release date for the game. However, sign-ups for the Dragonflight alpha and beta are expected to go live on the official World of Warcraft website soon. When that happens, players will have the opportunity to embark on new quests and raids while exploring the coast of the dragon’s ancestral home. After centuries out of sight, since being magically sealed away by the Titans, the dragons have awakened in this dangerous land. Fans of the World of Warcraft saga will recognize some dragon characters from previous versions, including Alexstrasza, Ebonhorn, Kalecgos, and Wrathion. This installment puts these firebreathers in the spotlight.

The user interface has been revamped for the latest offering from Activision Blizzard. Players can expect a much more customizable game without the need to download extra mods. Specializations have returned to the profession system, which also features work orders, stats, and job-specific equipment.

In Dragonflight, the level cap, or maximum level a player character can reach in a game, has been expanded to 70, and there are multiple new leveling zones to help players get there. Zones are areas of the map with designated scenery, themes, and characters. Here are some new aspects of the game:

The History of Dragonflight

According to Activision Blizzard’s World of Warcraft lore, the dragonflights are the five subraces of dragons that have survived. They’re known by many names, including Dragon Aspects, the Great Aspects, and Aspects of Azeroth.

While at one time, dragons of every color of the rainbow populated the mythical land, now only five colors remain: blue, bronze, black, red, and green. Each dragon group takes pride in its color and heritage. Within those dragon clans are smaller family groups called broods. Each flight has its own distinct goals, ideals, and interests. Experienced players understand that’s is usually best not to disturb a sleeping dragon. According to Mike Morhaime, Blizzard Entertainment’s co-founder and retired president and CEO, “As World of Warcraft evolved over the years, it actually kind of became less social because, in an effort to achieve more accessibility, we removed some of the reasons why you need to play with the same group of people over and over.” That may be; however, right now, gamers around the globe are anxious to see what the magical guardians of Azeroth have in store in the upcoming Activision Blizz